Ashely Ocean is hard up for money, so when she steps out of the shower and spies her stepbrother’s wallet she figures that she’s got an easy payday. Ricky Rascal is asleep when Ashely initiates her master plan of taking his cash, but he wakes up and catches her in the act. Instead of sending Ashely packing, Ricky decides he’s cool exchanging his money for sexual favors from his smokin’ hot stepsister. Ashely wants it badly enough to start sucking Ricky’s hard cock.

Ricky can’t believe he’s finally got his stepsister’s lips wrapped around his fuck stick, but now that it’s happening he wants more. He urges her to pull her pants down and get on her knees. Coming up to her from behind, he slides his thick stiffie balls deep into the tightness of her cream filled fuck hole. Ashely may be fucking Ricky for money, but she finds that she loves the feel of his erection buried deep inside as he fills her to the brim with every stroke.

Rolling onto her side, Ashely lets Ricky spoon behind her while he continues to dominate her juicy snatch. She spends some time on her back, but as she nears her big finish she climbs on top and rides her way to glory. Ricky follows his stepsister over the edge, pulling out just in time for Ashely to stroke him off. She takes her well-earned money, but little does she know that Ricky plucks it back out of her pocket as she’s getting dressed in the aftermath! 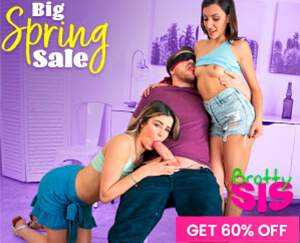