Lulu Chu is hanging out with her BFF Xxlayna Marie, but she finds that she’s restless. She has had the hots for Xxlayna’s stepbrother, Robby Echo, for a while now, and today she decides it’s time to start acting on that desire. Lulu begins by making a list of dick doctor questions. Then she blocks her phone number and calls Robby up and starts going. Telling Robby that she’s calling from Dr. D’s office, Lulu goes down her list of questions under the pretense that it’s Robby’s annual penis checkup. Xxlayna has no idea what Lulu is up to, but his answers get both of them really, really hot. The girls can’t keep their hands off themselves as Lulu continues her Q&A with Xxlayna’s unwitting stepbrother. Eventually, Lulu asks Robby if he can get hard and offers to talk dirty to him to help. Of course Robby takes her up on it, then slides his hand into his pants to start jerking off until Lulu abruptly tells him she’s got to go.

After Lulu confesses that she was talking to Xxlayna’s stepbrother, Xxlayna tells her that she’s always wanted to fuck him because the taboo makes it hot. Lulu encourages her to come with her to see what Robby was just bragging about. They decide to change into nurse outfits, but before they can go to the living room, Robby comes in to see if they’ve been getting any weird phone calls. They reveal that it was Lulu on the phone the whole time, and as soon as Robby gets over his surprise he seems open to the idea of taking things further. Next thing Robby knows, his stepsister and her friend are on their knees with his dick in their mouth. It’s a real life penis check up now as they explore every inch of his fuck stick with their hot eager mouths and roaming hands. 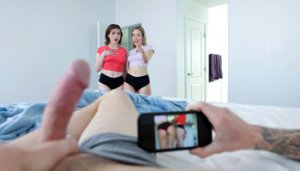